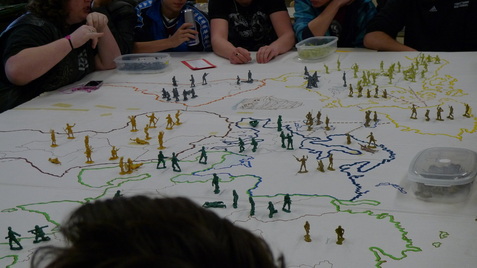 Play and formalized games play an incredible role in learning from a very young age, (as this prezi can explain.) It also brings an element of fun and curiosity back into the classroom that slowly seems to disappear as students leave elementary. In high stakes schooling, where mistakes can mean lower marks, games and play offer an opportunity to explore and interact with material in a risk-free zone, focusing on the skills that make great citizens and fantastic students.

A modified game, modeled after Risk was fit into the 20-2 curriculum was used in my classroom, using World War I as the example of nationalism's growth and dangers. Alliances were given to students, along with military resources and then a giant game was played over two classes. The enviroment was unruly, divided into two 70 minute sets and plenty of topics that were not intended to be covered came up and were discussed. It was an excellent way to assess the learning of the students and find out where their interest lay for the next topic, World War II and extreme nationalism. For the students that it didn't engage, a more traditional pen and paper assignment was given, so no one was forced to participate that was uncomfortable.

Students naturally explored the topic, having secret alliances, disputes and generally growing egos that become their downfall. It was easy to see how it all fit into the wider curriculum and students were not bogged down definitions and details, they learned by the feel of it, naturally coming to use words that were gently introduced. The students interacted with a large map which fostered their understanding of how geography played into the war. In frustration, one student asked if he could just 'nuke' the other country, to which a fellow team mate informed him that this was the first World War, not the second, and I jumped in to give a mini lesson on nuclear arms as other countries took their turns. Students jokingly talked about symbols of national pride, Team Britain complaining that they would have had a much better Navy is this were real and the Team Germany aggressively taking control of the board as they insisted it for just for 'breathing room.'

The lesson was run by my partner teacher, with myself acting as a classroom aide, but I have since accumulated my own materials to run the game, absolutely adoring how it changed the atmosphere of a classroom. It was also a good unifying activity, coming in part way through the semester, when relationships were firmly established and students were feeling comfortable in the environment created.

Games allowed a large group of students, many coded, to explore a topic verbally and in a tactile fashion which is a route of learning not often taken once out of elementary. Inquiry has to take on a different form in a classroom where the unknown and exploration is viewed as frightening, rather than stimulating and interesting. However, within the structure of a gam, and with the ability to be noisy and have plenty of conversations within smaller groups the students, most students were happy to explore. This was fertile grounds for new topics to be introduced, and it allowed us (the teachers) to learning more about their interests and questions. And engagement? In spades. The students spent the rest of the semester asking about if they could play risk if they finished early. In many 20-2 classrooms it can be struggle to get your students to finish assignments at all, but now we had a great way of motivating students to finish early and engage in further learning with the 'extra' time.