Relationship to the Practical

Teaching is a physical profession, one in which the body stands central, not just in the room but in the discourse around the experience and nature of teaching, (Estola & Elbaz-Luwisch, 2003). This is clear in the observations I have made in my journals from my first week of practicum, describing the actions, motions and appearance of everyone and everything in the classroom. This has carried on to so much of what I have been reading about that the questions about digital presence have largely gone unanswered in this inquiry as the physical and practical have taken precedence.

By chance I had the opportunity to participate in a project that brought the physical and practical to the forefront of my thoughts. Upgrades to the technology used in the classroom are being plotted out currently at the University, but a large part of that process included a consultation and feedback process that asked professors and instructors alike what technology they used, what worked and what did not. Throughout that process, many physical and pragmatic concerns were raised, from the simple question of how to use technology but not be tied to standing to a single spot, to how much spacing is required between students if you want group discussions to occur. This made me slowly realize that the design of the room and technology that goes into it can not only shape what style of teaching can occur, but the quality of it as well. It is not as simple as the question of using a technology if it is in the room or not, but also one of what can practically be done with a class or 150. While we aren't at those levels yet, engagement and interaction has been a concern for many pre-service teachers I have spoken to, in classrooms of 35-40 students. It also spoke to how a teacher can interact with technology in the best possible way, with a monitor at the back of the room mirroring what is being projected behind them, so that the teacher is given full range of movement while facing the class, or if it is more important to be able to hold a tablet in one hand to walk with that projects to the screen behind them. These preferential decisions both still allow the teacher to stand and face their class with the range of motion to walk as they lecture. Is that important technically speaking, to teach well? Hard to say, but instructors were clear within the process that even something as simple as walking to make eye contact with different students made a huge difference to how they teach.

Inquiry takes a different name in the business world, the independent learning seen as a definite asset, a cost effective way of delivering information and the most flexible solution for the learners. Often, online courses are the norm for large scale delivery of courses, either through videos, guided power point presentations, step by step manuals or it's smaller, less detailed cousin, a job aid that gives you the basic information to perform single tasks. It struck me then that inquiry is the norm in the business world and while there is a great push to bring it in the classroom, I have yet to see it as the norm in a classroom. Independent, lifelong learners still remain scare in our classrooms, but for success in the Support Center, it is a requirement. Allow me to qualify success as well, because in a specifically IT setting, lifelong learning is the only way to remain current, let alone move up in one's career. In environments that are less IT focused, this could be seen as less of an issue but it is becoming nearly impossible to ignore technology in any office setting. Skills simply do not stay current when it comes to technology, unless they are the skills of lifelong learning. 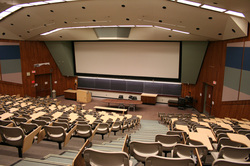 One interesting concern that was raised by the IT professionals in the room, was the question of if technology was not being used because it wasn't useful, or because the instructors and professors lacked knowledge and ability to use it well. The issue of support for technology has come up numerous times in seminars, with very little positive to be said about the support encountered within schools. Generally, if it wasn't working you didn't even have the correct permissions to troubleshoot it, and those classrooms don't have a ComTech emergency phone hanging on one wall. Even if the technology was being technically used correctly, there were many classrooms where the Smartboard mounted on one wall had become a glorified whiteboard and little more. The ways in which the UofC is addressing this issue made me wonder how the CBE could benefit from a similar approach. Simply putting the technology in the room is never enough.

This project has only led me to more questions though, around where technology ends and good design starts and how much educational theory and educators need to be a part of creating a truly effect teaching space.  To a lifelong learner like myself, more questions are a fantastic result of a study.